He smacked right into the world famous pop star! Read from BUNNY OMEGA ON THE RUN #MPreg #MMromance #PNR 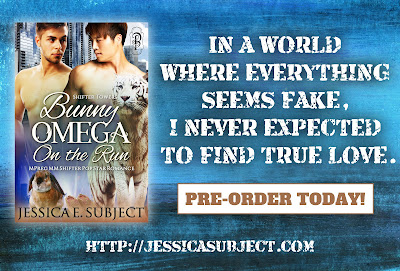 Hello! I'm so excited for the release of Bunny Omega on the Run, an MPreg MM Shifter Pop Star Romance with a cute bunny omega and a sexy tiger alpha. This story releases on Friday, and I've decided to spend today through Thursday sharing the first chapter with you. Be sure to come back for more tomorrow!

I eyed the barrel of the 9mm pointed at my face. Clutching my hands behind me, I tried to hide the excessive shaking throughout my body. “It’s okay. You can pay me later. I’ll...I’ll just be going.” Anything to get away from there alive.

The lanky, bald man in the black suit clicked the safety off. “There won’t be another time.”

Without waiting for a shot to be fired, I spun around and bolted down the street. I had no time to shift. I simply ran. Over fences. Through yards. Down one alley after another. I didn’t stop. Couldn’t stop. My mom and siblings depended on me. I couldn’t help them if I was dead.

After what felt like forever, my thighs burned and chest ached. I had to stop. Or at least slow down. But I didn’t know if I was still being pursued. I dared a glance behind me. No one. Thank fuck! It was time to slow down. Shift and find a place to hide.

I slammed into something hard. Someone hard. Liquid terror filled my veins. Somehow the guy in the suit had outsmarted me. I was dead. Gone. No chance to say goodbye to my family. My knees gave out, and I crumpled toward the ground. But strong arms caught me, lifted me back up. Did the man want to stare in my face when he killed me?

“Whoa, whoa. It’s okay, little omega. I won’t hurt you.” The man pulled me closer. Tight into his broad chest.

And that’s when I smelled the wild, rugged scent. A predator. Not the human who had been chasing me, but a tiger. I was in the arms of one of the most dangerous types of shifters in the world. But when I dared a glance up into his eyes, I only saw a concerned alpha. One whom I instantly recognized. TK. The pop star dominating all of the music charts. I’d had no idea he wasn’t human.

Filled with a new fear, I slowly backed away. Being anywhere near the star, I’d have more than one man with a gun after me. If he didn’t take me out, someone else would.

But TK didn’t let go so easily. He cupped my elbows, keeping me steady. “What were you running from?”

I didn’t answer. Behind TK, men in black suits—not cheap knockoffs like my pursuer had worn, but actual designer brands—eyed me, waiting for me to do something stupid.

Needing to prove I offered no harm, I shifted. In my shifted form, there was no way I could harm their charge.

I expected to fall to the ground and hop away. But TK didn’t let go of me. He held my scruff. “Oh my! You are the most gorgeous bunny I have ever seen. Just as beautiful as when you were in your human form.” He released his grip and stroked behind my shoulders. Then in between my ears. “You are just adorable with one ear up and one ear down.”

More like disfigured. My rabbit was a lop, supposed to have both ears down. But what did a tiger know about bunnies except how to eat them? Maybe he was buttering me up to do that later. 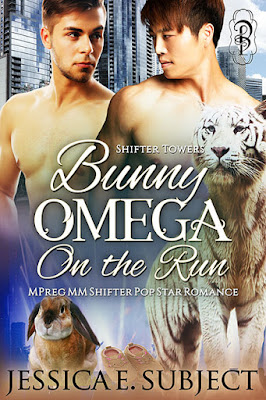 Now available in print!
Amazon US