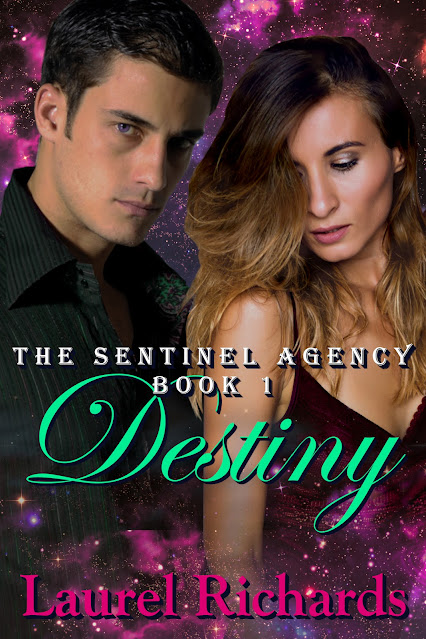 DESTINY
The Sentinel Agency book 1
by Laurel Richards
Undercover operatives have discovered Delfina has the power of foresight, and they want to capture and use her. Accompanied by her emotional support animal, Delfina uses her ability to stay ahead of her pursuers. The one thing she doesn’t foresee is Rave. The Imperian male claims she’s his genetic match, but he has so many aliases that she’s not sure if he’s the good guy or the bad. Attraction ignites as they are thrown together by mysterious government agents, a wildlife trafficking syndicate, and a covert agency that recruits people with unique talents. Secrets, passion, and intrigue collide in this sci-fi romance.
Content: m/f romance, love scenes, fight scenes
AVAILABLE FROM:
Books2Read (Universal Buy Link)
Amazon US | Barnes & Noble | Kobo | Scribd | Apple

Delfina Perry walked along the strip of stores inside Terminus Air and Space Port. She was window-shopping—killing time before her flight off the planet—when she suddenly had a flash of foresight. She saw that an armed man and woman were going to take her into custody. The pair would have government identification, though she wasn’t sure if the IDs were real or fake. Once they detained her, there was a four in five chance they’d relocate her to an undisclosed location.
That was all Delfina knew. Although she was tempted to look deeper into the future to learn more details, she didn’t dare. Use of her ability left her temporarily nearsighted. The further ahead she foresaw, the worse her eyesight became. At the moment, going blind in this bustling spaceport would leave her far too vulnerable. These two agents must have tracked her ticket purchase, because the most probable future involved her being captured at or near her departure gate.
“It looks like we won’t make our flight after all,” she told Bulu.
Her furry friend squeaked from her perch atop Delfina’s shoulder. The Dunian berlalu had huge magenta eyes, tiny ears, and the flat body of a flying squirrel. Her pelt currently mimicked the ombre effect of Delfina’s brown and blonde hair. At less than a kilogram, Bulu’s weight barely registered, though her soft warmth was comforting.
“I’m sorry, sweetie. I thought your new certification as a service animal meant no more sneaking around, but you’ll need a disguise. We can’t afford to stick out.” Delfina pointed at the nearest shop window. “How about that clutch purse over there?”
Bulu grunted, clearly unimpressed by the simple black pocketbook. A moment later, she shifted the chromatophores beneath her clear fur so that she resembled the blue-and-pink embroidered handbag off to the right.
“You’re such a fashionista.” Delfina reached up so that Bulu could grab her hand with all four paws.
The berlalu’s flat toes almost formed suction cups, and she was used to hanging upside down and using her body like a hammock to sleep. In this position and decked out in designer camouflage, Bulu looked almost exactly like the purse in the window.
“Don’t worry. I won’t tell anyone you’re a knockoff.” Delfina started walking, trying to look casual and blend into the crowd.
Another flash of foresight made her wince. Now that she was not going to show up at her gate, the probable future had her pursuers searching the whole spaceport for her. With their credentials, they could gain access anywhere they wanted, including the security office. She didn’t have much time.
Delfina headed for the nearest exit, with half her attention on the plans of the pair stalking her. She didn’t notice the man who stepped into her path until she collided with his hard body and bounced off. He steadied her with one hand under her elbow.
“Sorry,” she said. “I didn’t see you.”
Now that she did see him, though, she did a double take. High cheekbones, a chiseled jaw, and intense violet eyes made for a sexy package. The man’s hair was dark and thick, and he wore it in a short, no-nonsense style. They locked gazes, and his expression turned unreadable except for a slight parting of his lips. Delfina’s mind went completely blank, which almost never happened.
Then he firmed that intriguing mouth of his, along with his grip on her arm. “Going somewhere, Miss Perry?”
Her breath locked in her throat. Had she miscalculated? Was there a three-person team after her?
Find LAUREL RICHARDS here:
Website | Twitter | Amazon
Goodreads | Bookbub | Books2Read 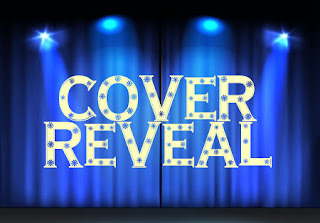 Hello everyone! I'm excited to share the cover for my upcoming release! GENJ is the 2nd book in my Kaddim Brothers series, and will release on February 25, 2022. Check out the cover!! 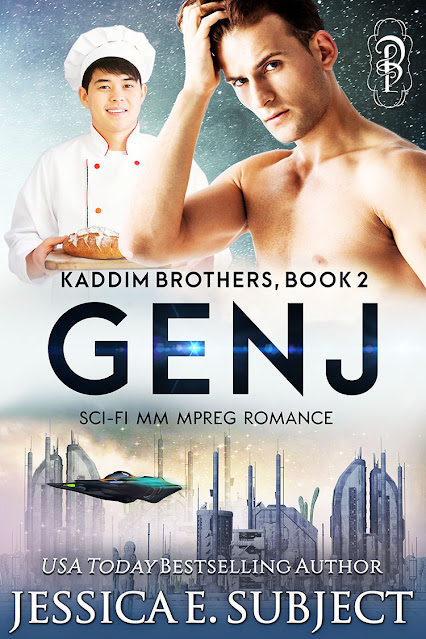 GENJ
Kaddim Brothers book two
Genj is a cinnamon roll alpha. Even as one of the circuit’s best space racers, he’s shy and rather clumsy. Not qualities anyone wants in a mate, especially the omega he’s crushed on for years. But when Genj invites Utahn on a whim to visit him for a weekend, he’s surprised the omega agrees.
Utahn never expected his best friend’s older brother to reciprocate his feelings. Genj is a space racer, and everyone in the universe knows they rarely commit. When the two get together, sparks fly. And what once seemed impossible becomes a dream come true.
But situations change. And past relationships have a way of interfering with new ones. Can Genj and Utahn work through past traumas, or were they never meant to be more than a childhood crush?
RELEASES FEBRUARY 25, 2022
Posted by Jessica E. Subject at 9:37 AM No comments:

Hello and welcome to another Weekend Writing Warriors post!
Hello everyone! Thank you to all those who came to visit me last weekend! This weekend, I'm sharing another snippet from GENJ, the second book in my Sci-Fi MPreg MM Romance series, KADDIM BROTHERS. I'm happy to announce this story has been contracted to Decadent Publishing and will likely release February 25, 2022. I'm looking for blogs to visit, so if you have any space around this day, please let me know. Thank you!
Set-up: Last weekend, Genj was at the spaceport, waiting for Utahn to arrive, and he was worried as to whether his crush would show up. Well, this weekend, we find out that Utahn did show up and get to see them together. Enjoy!

“How was the trip here?” I hoped small talk would help ease some of the awkwardness. I didn’t want the entire weekend to be like this.
“It was good.” He shrugged. “Pretty boring, really. The Olarian beside me slept the whole time, but I couldn’t. I was too anxious, I guess.”
“Were you afraid something would happen on the flight?” Because why else would he be anxious? Though, he’d flown on the spacecraft many times before.
Utahn nudged his shoulder against mine. “No, I was anxious to see you. I like you, and I really want this weekend to go well.”
“I want it to go well, too.” My cheeks warmed along with my groin. He’d finally admitted something my younger brother had told me a while ago. The guy I’d been crushing on for most of my life liked me, too. But did he mean as more than a friend? Or was I getting too far ahead of myself? 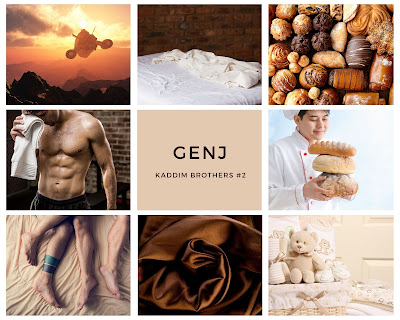 This is my mood board for Genj
GENJ
Kaddim Brothers book two
Genj is a cinnamon roll alpha. Even as one of the circuit’s best space racers, he’s shy and rather clumsy. Not qualities anyone wants in a mate, especially the omega he’s crushed on for years. But when Genj invites Utahn on a whim to visit him for a weekend, he’s surprised the omega agrees.
Utahn never expected his best friend’s older brother to reciprocate his feelings. Genj is a space racer, and everyone in the universe knows they rarely commit. When the two get together, sparks fly. And what once seemed impossible becomes a dream come true.
But situations change. And past relationships have a way of interfering with new ones. Can Genj and Utahn work through past traumas, or were they never meant to be more than a childhood crush?
RELEASES FEBRUARY 25, 2022