A second run in. Read a snippet from BUNNY OMEGA ON THE RUN #MPreg #PNR #MMromance #newrelease

Thank you to all of you who visited my post last weekend! I'm continuing with more BUNNY OMEGA ON THE RUN, an MPreg MM Shifter Pop Star Romance. This story is now available in digital and print at Amazon. And I'm hosting a release contest. Find that at the bottom of this post.

Set-up: Last weekend, Kish took a delivery to Adan Records in Shifter Towers and met Conn there. Of course, the wolf shifter intimidated him. But, is all lost for the bunny shifter?

Once again, I'm skipping several sentences to get to the part where Kish is exiting the elevator, ready to leave Shifter Towers. (Creatively edited from published version to fit the ten sentence limit)

As soon as the doors opened, I plowed right out, anxious to leave the den of predators behind, return the delivery bags, and finally grab something to eat.

I groaned, having hit someone very solid. Twice in one week; not good odds.

Fuck! I dared a glance up, meeting TK’s gaze. “I’m sorry, I’m really sorry...I should watch where I’m going, I really should.” 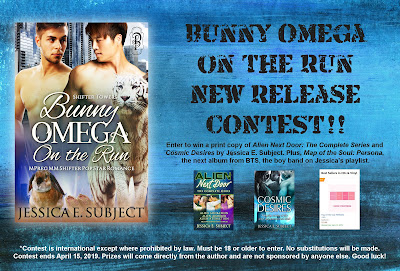