Jager is assigned a personal mission from a former Defender. Read an #excerpt from JAGER #scifirom #romance #GalacticDefenders

Hello! Welcome to week two of my December excerpts! Today, I'm going back to the Galactic Defenders series with an excerpt from JAGER. The heroine of this story, Katrina, is the daughter of Bryce and Lalia. Happy reading!

Jager nodded to Silus, his second who was also a shuttle pilot. If only the Kalaren had as much confidence fighting an Erebus as he did flying through space. “Put it on screen.”

With the flick of a button, the monitor beside his captain’s chair lit up, and a familiar face came into view.

“Prince Bryce.” He hadn’t seen the famed Defender since he’d retired but would always make time for him. “To what do I owe the pleasure?”

“First of all, don’t ever call me Prince.” The man glanced over his shoulder. “I am, and will always be a Defender until I die.”

“Got it.” He was just as touchy about his royal title as his daughter. “Now, how can I help you?”

Bryce leaned forward and stared into the screen. “You can tell me where my daughter is, to start.”

“Um...” Had he heard the man correctly? “What do you mean? I thought she was supposed to be on Hemera by now.”

“That’s what I thought, too.” The older Kalaren rubbed the back of his neck. “But when I went to meet her, she wasn’t there. In fact, she wasn’t on the shuttle at all.”

“Oh Gaspra.” Jager gripped the arms of his chair.

“Exactly. And when her mother finds out, she’s going to be livid. I need to know where she is before I have to tell the queen.” He glanced behind him again. “When was the last time you saw her?”

“Did you actually see her get on the shuttle to Hemera?”

“No.” He wasn’t her keeper, had a mission to get ready for, and the rest of his squad to prepare. “I wasn’t on the docking bay when her shuttle left.”

Bryce rolled his shoulders, seemingly more afraid to tell his wife their daughter hadn’t arrived on Hemera than to face a hoard of Erebus. “Granil can’t locate her on the carrier, so I suspect she’s on one of the shuttles heading to Terra. Please be on the lookout for her and report to me if you see her. She knows the planet far better than any of you, and your destination is right around where she grew up. I don’t doubt she’ll try to go off on her own. Maybe attempt to stay on Terra for good.”

He doubted that. Not with a boyfriend who would never fit in among the Terrans. In fact, he was pretty sure it was Zulu’s shuttle she’d sneaked onto, the goodbye on the carrier for show only. “As soon as I find her, I will let you know.”

“Thank you.” The screen went black, and Jager glared at the shuttle on the view screen ahead of them. If the princess was on there, he’d make sure she went to Hemera for good. 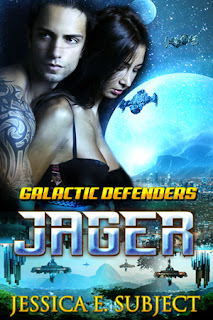 Jager's new squad of Defenders has completed training, but the spoiled princess who has grated on his nerves since her first day of training is called back to Hemera for a yearly celebration. When Princess Katrina doesn't show up, Jager must find her and drag her home, where he wishes she would stay.

Katrina is a Defender, not a princess. And there is no way she wants to return to a planet she hates for some stupid ceremony. Not when she could be out killing Erebus with her squad.

But when a new enemy threatens both their lives, they must work together to survive.