Frey shows his true self to Carrie. Read an #excerpt from CELESTIAL SEDUCTION #scifirom #alienromance #romance

No, aliens don’t exist. Or did they? How else could she explain the blue light from his hands and the resulting sensations she’d felt inside? And how could he do things the doctors could not?

If his words were true, she should run away, get as far away from him as possible before he began experimenting on her. Or had he already? But none of his actions brought her any harm. He’d only held her down and kissed her to keep her calm. And maybe even given her the chance to become a mother.

But oh, that kiss.

And now, he sat on the other side of the room, giving her space and time to think things through.

But he doesn’t look like an alien! Why would he make that up though? What would he gain?

He looked over, his eyes empty, hollow. She’d never seen anyone look as sad without shedding a tear, quite the transformation from the confident human she’d seen enter the room hours earlier.

Guilt overwhelmed her for wanting an answer to the question in her head, but she asked anyway. “Is that what you really look like? I mean, you’re like the perfect male specimen.”

She hoped he’d respond with a smile, but he just shook his head, eyes cast down. “It’s just an illusion created to help us fit in on Earth.”

She hid her panic, but her mind raced with thoughts of an alien invasion. “Us? There’s more like you?”

“There were more of us, but everyone else returned to Ginnun. I’m the only one left on Earth.”

“Oh, but why? Why did you come here and why did you decide to stay?”

He glanced toward her. His eyes no longer held any color, their blackness appearing wet. “We came here to learn. The disguise is to prevent spreading fear and violence with our arrival. We mean no harm, but as my kind has travelled through space over the centuries, we have never been met with peace.”

She could understand why. Most people on Earth believed aliens would only come to the planet to take over. Unsure what she believed, she trusted Frey had no intention of hurting her, he’d had plenty of opportunity already. “Again, why did you stay?”

His eyes blinked—sideways. She tried to hide her gasp, but failed and he looked away. “Like I told you, my intended one mated with my former friend. I had no one to return to.”

She slid to the end of the bed, wanting to get closer to him. “Don’t you have family, friends? Are humans really that interesting?” She walked toward him, curious to know and see more.

“No one that matters.” He paused as if he noticed her getting closer. “On Ginnun, we are taught from a young age that displays of emotion are banned, not that those teachings are always successful. Parents aren’t supposed to love their children and husbands can’t show any affection for their wives. When Tandee gave herself to another, it tore me apart, but I wasn’t allowed to feel that way. After only a month here, I knew I didn’t want to return to Ginnun. I wanted to feel.”

She stood in front of him then and held out her hands. His black eyes met hers as he wrapped her hands in his. “You’re okay with what I told you?”

“No, but I’m trying to stay open-minded.” She tried to keep her hands from shaking even as she showed him she could handle the information. “I don’t feel like you want to hurt me though.”

He lightly squeezed her hands, a smile forming on his lips. “I would never bring you harm.”

Lifting one hand up, she gently placed it on the side of his face. “Will you show me what you really look like? I can see your real eyes, but I want to see the rest.”

“You won’t run away?” She winced seeing all of the confidence he’d had at the beginning of the night gone, but it made her trust him even more. “Whatever you do, please don’t scream.”

“I promised to stay the entire night, didn’t I? And don’t worry, I don’t scream unless someone sneaks up on me, or if I see a spider. You don’t look like a spider, do you?” The very thought sent a chill through her body.

He smiled, some of his confidence back while his human image flickered for a few seconds before completely disappearing. Unsure what to expect, she tried not to judge until she’d set eyes on his entire figure. Long, spindly fingers intertwined with hers. He tried to let go, but she held them tight. His body appeared taller and leaner than before. She saw the same black eyes, a less prominent nose and barely visible ears. His hair became jet black and appeared longer and curlier than before. Underneath luminescent scales, his skin shone a light blue.

“So, what do you think?” His mouth quirked, revealing his uncertainty.

Except for their color, his lips were the only thing that didn’t change. She leaned towards him, wondering if they would still feel the same. She had to stand on the tips of her toes to reach him, but wrapping her arms around his neck helped. The feel of his skin surprised her. Perhaps he didn’t have scales, but the pattern lay beneath his skin.

His lips were softer, warmer. When Frey responded to her kiss, it produced an urgency inside her that pushed away any lingering fear or hesitation. His hands cradled her ass and lifted her up, closer to him. She wrapped her legs around his waist. “Why don’t we get those clothes off and see what the rest of you looks like?” 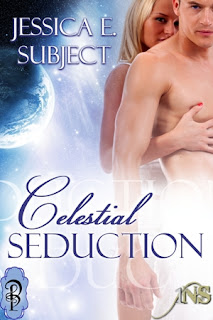