Hello! Tuesday is Alien Next Door day, so I'm going to share an excerpt from the third book in the series, ALIEN ATTRACTION. Happy reading!


With a heavy sigh, Angela slipped on her running shoes. Five o’clock in the morning remained far too early for any sane person to head to the gym, but if she didn’t go down to the apartment facilities at that time, she wouldn’t have the chance to claim a piece of equipment. Finally getting her shoes tied, she stood and grabbed her water bottle. She planned to plop her butt on the exercise bike and cycle for forty-five minutes, because she doubted she could concentrate long enough to remain standing on the treadmills or elliptical trainers.

The damn orb had decided to work again, sending pulses of light around her room in the middle of the night. Not as bad as a fire drill, but at least the fire alarm stopped, and she had the chance to go back to sleep. Not so with the stupid extraterrestrial sphere. After a sleepless Friday night, she’d shoved the orb in the oven to try and dim the pulsing light. Instead of being awoken by bright flashes, she’d heard the thing banging around, as if alive and trying to escape. Last night, she’d simply buried her head under the cover and pretended she didn’t see it.

Come morning, she yearned to leave her apartment and escape from the malfunctioning alien technology. With little energy, she rode the elevator to the first floor. The trek to the end of the hall took forever. For some reason, the corridor sensed her tiredness and expanded, making her walk even farther in her sleepy state. Thankful to finally reach the entrance to the gym, she grasped the handle and pulled.

A man kept a good pace on the treadmill. Her gut clenched. No way. Not this morning. She considered turning around and heading back to her apartment. She didn’t need another confrontation with the asshole from next door. But she’d lived there longer, claimed this time at the gym long ago, and she’d be damned if she let him restrict her movement. Thank goodness he didn’t occupy her desired machine.

Avoiding eye contact, she ambled over to the stationary bike. It was all she could do not to take a quick peek, catch a glimpse of his breathtaking eyes. No, even that view couldn’t redeem his horrible attitude.

Placing her water bottle in the holder, Angela stuck one foot into the pedal strap before she hopped onto the bike and buckled her other foot. She reached for her phone to turn on some tunes. Shit! It wasn’t clipped to her arm. She’d forgotten it in her apartment with her towel and keys. Great, not only did she have nothing to distract her from Mr. Attitude, she’d left her apartment unlocked, open to strangers. Anyone could walk in and steal her phone, furniture, or even the orb. Although, she hoped someone did steal it, take away the blasted piece of alien junk forever.

Beginning to spin, Angela programmed the tension for a nice, steady ride. No rolling hills or uphill climbs that morning. She closed her eyes, imagining a trip along the roads back home, wood lots on either side and birds chirping all around. If she couldn’t get lost in her music, she would in her daydreams.

When she opened her eyes again, she checked her watch. Twenty minutes had passed. And someone occupied the elliptical trainer immediately beside her—her pain-in-the-ass neighbor who had, at some point, taken off his shirt and moved closer to her. Bronzed skin covered ripple upon ripple of toned muscle. He had his dark, wavy hair up in a man bun, accentuating the tribal-looking tattoos across his chest, back, and shoulders. Swallowing the saliva forming, she glanced away from the man who resembled an Ancient Roman Gladiator. But no matter how attractive he appeared, she couldn’t forget his piss-poor attitude.

“Good to know you’re awake and not pedaling in your sleep.”

She turned her head to him, unsure if she had heard him talk to her in a pleasant tone, or imagined the whole thing.

Slowing his pace, he met her gaze, a smirk playing across his lips. Part of her yearned to swoon at him for talking to her, but a much larger portion wanted to reach over and kick him in the shins. Taking his shirt off to reveal his godly physique and a half-hearted smile did not make up for his rudeness.

Staring straight ahead, she stood and cycled, giving her ass a break from the seat. She didn’t want to make conversation with an arrogant prick. If her orb did begin to function properly, it would definitely tell her to stay away from him. 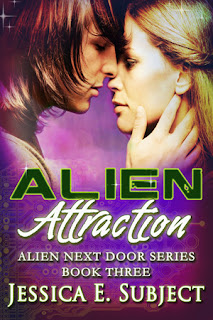 
She wants to be more alien.

He wants to be more human.

Born a galaxy apart, will Angela and Chal have a chance at love, or will their extraterrestrial secrets leave them running to stay alive?