Hannah and Colin are getting used to gravity again. Read an #excerpt from ALWAYS HER WINGMAN #scifirom #romance

Hello! Today I'm going to share an excerpt from ALWAYS HER WINGMAN, the first book in my Mars Squadron 17 series, which released earlier this year. Happy reading!

Excerpt from ALWAYS HER WINGMAN
Mars Squadron 17 book one

Closing her eyes before waiting for the medical team to leave, Hannah quickly dozed off. She woke sometime later, side rails up on both sides of the bed, the lights turned down low. She heard the heavy breaths of the rest of her team. Thank goodness none of them snore, or I likely would have suffocated them long ago.

Sitting up, she clicked down one of the rails and swung her legs over the edge of the cot. No longer dreary, she wanted to set up a com video link home to see and catch up with the people she loved. The occasional e-mail from her dad hadn’t been enough to appease her mind that nothing had changed.

She planted her feet on the floor, leaned forward, and pushed her body up, hoping she didn’t end up in a heap. Her knees trembled a bit, but she managed to steady herself before taking the first step. Putting one foot in front of the other came as a struggle. Instead of air, she shuffled through water. No, something thicker. Molasses. She didn’t know the location of the communications link-up, but at the rate she traveled, she’d never make it out of the room.

Hannah gasped, slamming her hand to her chest. “Garish, you scared me.”

“Sorry.” He turned onto his side, his crystal-blue eyes somehow radiant in the dim light. On her most stressful days on Mars and aboard the shuttle home, she would stare at him and find peace in the mesmerizing color of his irises. Though she’d never tell him that, not wanting to give him any indication he had a chance with her. “I just wanted to know if you need me to call the medical staff or something. We’re not supposed to move around on our own yet.”

Always looking out for her, and never a rule breaker, Garish remained her wingman, during flight and now on the ground. “I’m good. Just wanted to call home before we start therapy.”

“Liar. You’re not fine. You look like a toddler learning to walk.”

So much for his marriage proposal. Now he hurled insults at her. She rolled her eyes, sure she couldn’t be that bad. “Thanks, I appreciate the support.”

“We’re back to Earth gravity here, Staff Sergeant. It’s okay to admit your muscles aren’t what they used to be. You’re getting old, you know.”

“Fuck off, Garish. I’m not even a month older than you. Let’s see you try to walk to the door. I’ll race you.” Her knees objected, one giving way before she took another step. She crashed to the floor, slapping her hands on the titanium tiles to avoid a face plant. Her wrist snapped, but she sucked in a breath, trying to ignore the hurt.

“You’re on. Off to a great start, I see.” Garish slid off his bed, landing flat on his ass, his legs wobbling like jelly.

“You, too.” Hannah laughed, struggling back to her feet. He already had a height advantage, plus his bed was closer to the exit. But she would beat him. She had to, for her own dignity.

The next few strides came easy, inertia helping her along. She’d moved to the side to avoid crashing into Garish when a surge of pain ripped up her leg. Reaching out for whatever she could, Hannah grasped his shirt in an attempt to remain standing.

But the glare didn’t last long. He fell backward, his eyes widening and jaw dropping open as he plummeted toward the floor.

She didn’t realize he’d grabbed her hips until she tumbled toward him with no chance to stop herself. She crashed onto his chest, the air forced from her lungs. Her chin smacked the top of his rib cage, snapping her jaw and making her eyes water. Sucking in air, she tasted blood.

“Shit, Coriveau, are you all right?”

She licked her lip, finding the source of the blood. “I think so. Just bit my lip. You?”

“Um....” He groaned, shifting underneath her.

And then she felt it, his semi-hard cock obvious against her stomach. She gazed into his eyes, lit up with blue flames, igniting her too-long-dormant desires.

Her heart thumped against her rib cage. She couldn’t move, didn’t know if she wanted to. Every nerve ending tingled, those in contact with him on fire.

He lifted his head, and she sank deeper into his heated gaze. His lips brushed hers, sweeping across the open wound, lingering until he kissed her. Slow, sweet, and oh so magical. Her skin sizzled from his touch.

Wrapping his hands under her thighs, he pulled her closer.

Why didn’t I let him kiss me sooner?

He pulled away, and she whimpered, desperate for more. Resting his head back on the floor, he gave her the lopsided grin she’d come to adore. “I’ve always wanted you, Hannah.” 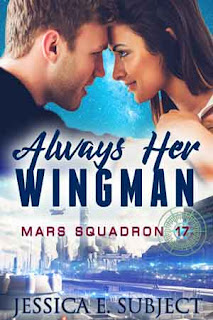 About ALWAYS HER WINGMAN:

Staff Sergeant Hannah Coriveau dedicated the last five years to the Space Military Command. Heading back to Earth, she’s ready to begin civilian life and reunite with her parents and the boyfriend she left behind. The person she’ll miss most is Garish—her wingman, best friend, and the one who made her regret not being single.

Senior Airman Colin Garish wants his squadron leader. Bad. After spending so much time by her side—both in the Martian skies and on the red planet—being her friend isn’t enough. When Hannah learns of her boyfriend’s infidelity, Colin is there to comfort her.

Before Colin has the chance to confess his feelings, Hannah receives worse news from home. Her father is dying. Seeing her devastation, Colin remains the friend she desperately needs. But in her grief, she pushes him away. Will Hannah let him back in her life when they land on Earth? Or will Colin never get the chance to win her heart?