Can Victoria and Kaye work together for the sake of their mark? Read an #excerpt from COSMIC SUTRA #lesfic #scifirom #romance

Hello! Today is day three of my December Excerpts post, and I'm going to share an excerpt from Cosmic Sutra, a lesbian sci-fi romance that takes place on a very distant planet. Happy reading!

Victoria headed to the dining hall, empty except for two greys at the table farthest from the buffet. They eyed her and whispered to each other behind their long, spindly-fingered hands. She grabbed what looked to be a sandwich with purple bread and green toppings—nothing fuzzy, so she set it on her tray and hurried back to her room. No point in sticking around where she wasn’t wanted.

While she ate, Victoria studied the class textbook on her tablet. Their first lab was to study various cognitive reactions to differing objects. Kaye had already decided they were going to study the heart rate of individuals in their reactions to various races at the school. Sure her partner just wanted to prove how much everyone hates Terrans, Victoria agreed anyway. No point in arguing. She’d already observed plenty of other cues indicating their disdain for her.

Fifteen minutes before the scheduled lab time, she left, heading to the psychology wing. The hall lights had been dimmed compared to the daytime and gave the place an eerie glow. Though the greys had denied ever abducting anyone from Earth, Victoria might have believed otherwise if she happened to meet one along the way. Her pulse raced as she eyed the numbers on each door, trying to locate the correct one.

Victoria gasped, placing her palm on her chest.

“Oh, come on. Don’t tell me I managed to scare a Terran.”

“My name is Victoria.” She’d had enough of being referred to by her home planet, as if everyone on Earth was related and possessed the same personality and motivation. “And you just caught me off guard. It’s late, and I’m tired.”

“That’s strange.” Kaye held the door open as Victoria ducked into the room. “I thought your kind thrived at night.”

She surveyed the area, rubbing her arms. “Not me. I just want to get this over with and return to bed.” A wave of sleepiness washed over her at the thought.

“Fine.” Kaye’s antennae stood straight up rather than curving forward like they normally did. She’d lost her six inch glass claws, her exoskeleton only covering her arms down to her knuckles like a pair of fingerless gloves. “You go into the closet and record the results. I’ll stay out here to welcome our test subjects and hook them up, okay?”

Victoria cocked her head to the side. For the first time since they’d been partnered, Kaye had actually asked her opinion. “I guess.”

“It’s just that if they see you before the test, it will skew the results. I can’t help it if everyone feels that way about your kind. It’s just the way it is.”

With a nod, Victoria entered the cramped smaller room, not much bigger than a broom closet. If she didn’t know any better, she would have believed Kaye felt bad about the discrimination. Was the leabu beginning to soften? She could only hope. 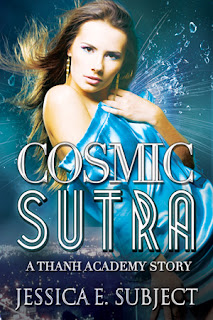 When Victoria is offered a scholarship to attend Thanh Academy for her last year of university, she jumps at the opportunity. Nothing could be more practical in her psychology studies than to travel to the other side of the universe and live amongst the life forms she strives to learn from.

Upon her arrival, she is met with hostility. Convincing the other students she is not like those from Earth who came before her takes time, but eventually she is embraced by a small group of friends, including a sexy female alien she fantasizes about on a daily basis.

Based on past experience, will Victoria keep her lust hidden deep inside to prevent losing a friend? Or will she confess her feelings to Kaye and possibly find her one true love?