From the beginning... Enjoy an #excerpt from HIS OMEGA ON STAGE #CountdownToReleaseDay #Romance #MPreg #PNR 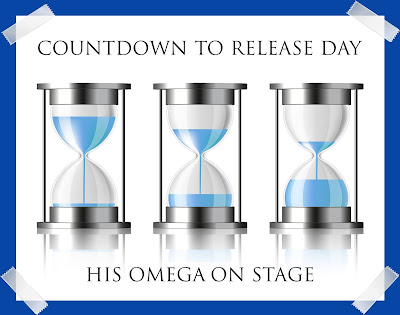 Hello and welcome to my Countdown to Release Day!
HIS OMEGA ON STAGE releases November 30, and I'm going to share something related to the book with you each day on my blog. I'm going to start with excerpts, until I've shared the first two chapters. Then, I have a couple other things planned. Saturday is my Weekend Writing Warriors post, where I'll share a snippet from further into the book. And on release day, there will be a special deal you're not going to want to miss out on!
So, I'll start today with an excerpt from the beginning of the book. Enjoy!

Chapter One
Jun
Another day, another dollar. Okay, so I made more than a dollar a day, but that was how the saying went. I was on my way to work once again. All I seemed to do lately, with nothing to break the monotony of my week. I used to teach guitar lessons to a few high school kids on my days off, but they either went off to college or had their own part-time job now with no time for lessons anymore. And I hadn’t bothered to look for more students. A boyfriend? Yeah right! Who wanted a leopard cat alpha who worked the evening shift at a record store? One who had a bad-boy reputation in high school that hadn’t translated well into adulthood. I had the occasional lonely omega come into the store at night. But a hookup with them never led to another. At first, that’s exactly what I’d wanted, having been burned by those I’d loved in the past. But, that had quickly become a lonely life. Now, I was “too passionate,” or “an overgrown house cat,” and not at all the type of fun my bed warmers were looking for. I wasn’t the “bad boy” they expected.
So, I worked. And when I wasn’t working, I listened to music at home, sometimes strumming along. That was my life. Boring. And another boring night awaited me at work.
Or so I thought until I got there and saw my boss, Kathie, the owner of KMM—Kathie’s Music and Merch—at the back of the store, fingers clenched in her dark-brown hair.
“Thank the stars you’re here.” She handed me a tall, yet thin cardboard box. “My father was rushed to the hospital a couple of of hours ago, and I need to get there.”
“Why didn’t you call me to come in earlier?” I felt bad for sleeping in and lazing around all morning while she was stressing the whole time. Sure, my job was boring, but Kathie treated me well, and we got along. “You know I would have.”
“I know.” She lightly touched my forearm. “But the doctor said he was stable, and I needed to discuss things with Sanjeet, the rep from Adan Records, before AI’s signing tomorrow.”
She nodded toward a stack of tall cardboard boxes like the one I held. “This is only some of the display for tomorrow’s signing. I need you to help those coming down from AR to set up. Felix is coming in to work the store so you can do that for me.”
“Okay.” I nudged her toward her office. “I’ll take care of it all. Now, get your stuff and go to your father.” She didn’t need to stress about anything else.
While Kathie gathered her belongings, I rang up a couple of customers. The part of my job I was used to. Setting up the event room for the signing would be new for me. Usually, Kathie did that herself. Sure, I’d retrieved items for her when the store wasn’t busy, but I’d never been left to complete the task on my own. Or even with support staff from AR. But I wasn’t worried. She wouldn’t trust me with the task if I couldn’t handle it.
A few minutes after Kathie rushed out to catch the light rail transit to the hospital, Felix arrived, his normally blond hair sprayed silver, the main color in all the promo for AI’s debut album.
I tried to hide my smirk. “Excited about the album, or hoping to pick up a fan?”
He winked at me. “Maybe a bit of both. AI is cute. Have you seen him?”
“Nah. I don’t get into artists for their looks. I need to hear them first before I become a fan.” And if they’re good-looking, it’s an added bonus. But like I’d ever have a chance with anyone famous.
“He has some covers out already.” Somehow Felix managed to pull an app  with a list of AI’s covers up on his phone, and flashed it in front of me within seconds. “You should give them a listen while you’re setting up for him.”
I shrugged. “Trying to copy someone else’s song doesn’t give me any idea of what an artist truly sounds like.” From my experience, artists usually didn’t live up to my expectations on their own music after I’d enjoyed a cover. Sometimes the artist released a single of a completely different style than what I’d hoped for.
“But he makes them his own. Does his own thing.” Felix’s pout was cute, but it wouldn’t make me listen to this AI kid any sooner than I had to.
“Whatever.” I picked up a couple of the boxes. “I know the album will be playing here all day tomorrow. I’ll decide then.” Likely I’d be sick of every song by the end of the day and never want to hear the album again. Adan Records did have some good artists, like Envi and TK, but the boy group they debuted recently was too bubble-gum pop for me. Listening to them made my teeth hurt. Although they and groups like them seemed to sell well. With the rise of digital music, many fans no longer bought albums, but they came in searching for other merchandise, like clothing, posters, trading cards, figurines, and more. Their hunger for goods was endless.
Tonight, we wouldn’t be very busy. Only the customers who knew about the signing and wanted to avoid the crowd would come in. Plus, the occasional random shopper. Nothing Felix couldn’t handle. So, I set to work carrying all the material to the event room.