Falling for an Earthling sends this alien into a tailspin! RATE OF RETURN is part of #PetsInSpace 5! Get it now! #romance #scifirom #books #reading 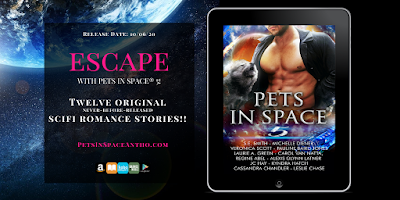 Pets in Space® is back!!!
For a limited time only!
Pets in Space® 5 is proud to present 12 amazing, original new stories! Join the adventures as today’s leading Science Fiction Romance authors take you on a journey to another world.
This year’s  lineup of authors includes New York Times, USA TODAY and Award-winning Bestselling authors S.E. Smith, Michelle Diener, Veronica Scott, Pauline Baird Jones, Laurie Green, Carol Van Natta, Regine Abel, Alexis Glynn Latner, JC Hay, Kyndra Hatch, Cassandra Chandler, and Leslie Chase.. Get the stories before they are gone!
Proud supporters of Hero-Dogs.org, Pets in Space® authors have donated $15,300 in the past four years to help place specially trained dogs with veterans and first responders. Open your hearts and grab your limited release copy of Pets in Space® 5 today! 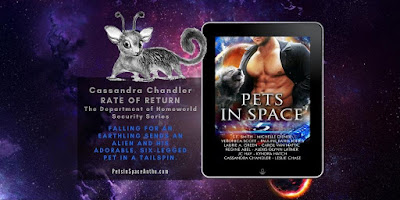 Includes the following stories...
THE KING’S QUEST
Dragon Lords of Valdier Series Short Story
by S.E. Smith
A playful trick leads to love for a Goddess, but will the King she falls in love with accept her for who she really is?
DARK AMBITIONS
A Class 5 Novella
By Michelle Diener
When a planetary exploration trip takes a dangerous turn, a human woman and her powerful AI friend will need all their skills to come to the rescue.
STAR CRUISE: RETURN VOYAGE
The Sectors SF Romance Series
By Veronica Scott
She survived the worst interstellar shipping disaster in history as a child but can she survive the RETURN VOYAGE as an adult?
GENERAL’S HOLIDAY
Project Enterprise Series
By Pauline Baird Jones
A General is ready for another fight—this time for the woman he loves.
JUGGERNAUT
The Inherited Stars Series
By Laurie A. Green
A security commander must decide if she can trust a mysterious stranger and his bioengineered StarDog when the secret underground site she protects is threatened.
GALACTIC SEARCH AND RESCUE
Central Galactic Concordance Series
By Carol Van Natta
Two military first-responders and an animal team of rescuers are the only hope for saving an entire town when disaster turns deadly.
REAPER
Xian Warriors Series
By Regine Abel
With time running out, a woman accepts her fate only to find hope in the genetically engineered warrior created by her captors.
PASTFINDERS
Starways Series
By Alexis Glynn Latner
A woman’s psychic gift might be the catalyst needed to save the life of the man she loves—in an ancient archaeological site that contains a stupendous discovery.
MITTENS NOT INCLUDED
TriSystems: Smugglers Series
By JC Hay
He craved order and discipline to help his life make sense. She offered him cats instead.
FINDING MOGHA
Before The Fall Series
By Kyndra Hatch
A human’s effort to save a sentient being takes her straight into the path of a Korthan warrior.
RATE OF RETURN
The Department of Homeworld Security Series
By Cassandra Chandler
Falling for an Earthling sends an alien and his adorable, six-legged pet in a tailspin.
GLITCH
Crashland Colony Romance Series
By Leslie Chase
An alien pirate and a human find love in the shadow of disaster.
NOW AVAILABLE FROM:
Amazon | Kobo | iBooks
Nook | Google Play 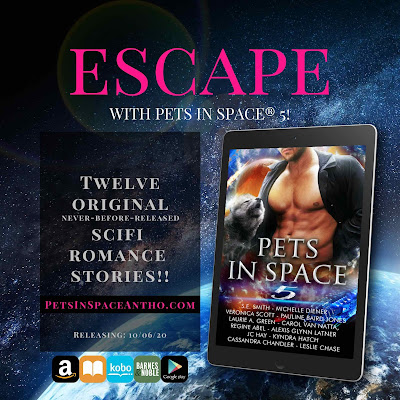