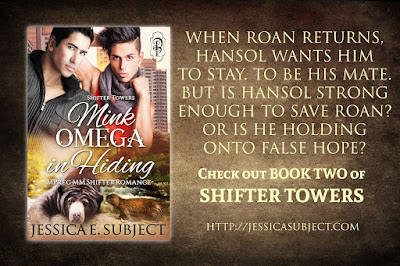 Hello!! I'm excited to say that the release date for MINK OMEGA IN HIDING is only a few days away! I've been sharing excerpts from the first chapter for the past two days, and have another for you today. I'm switching points of view here, and if you read BUNNY OMEGA ON THE RUN, you'll recognized a familiar character in this excerpt. If you missed the previous two excerpts, you can find them here and here. Enjoy!


“C’mon, TK. Give me five more. Now four. Three. Two and one. Great work today.” I patted the pop star on his back, proud of how much he’d pushed himself during today’s session. Working with several clients over the last couple of years, I’d seen so many different reactions to me pushing them to go farther. And I loved when they actually accomplished it. Though I had to be careful with TK. He was going on tour at the end of the month. As his personal trainer, I had to know his limits as much as he did, read his body cues so he didn’t injure himself.

He gripped my shoulder as he stretched each of his calves. “You’re really turning into a drill sergeant, you know that?”

“Nah, just getting you ready for all your excited fans.” And doing my job.

After completing his stretches, TK grabbed his towel and water bottle. “The only fans I’m concerned about right now are the two waiting for me in the daycare. With Kish at the first photo shoot of a new contract today, they’re all mine.”

“Your biggest fans, I’m sure.” I smiled, recalling last week when I’d seen the two-year-olds clinging to their father’s legs on the way out of the gym.

“Indeed. I love them to bits.” He flicked his towel at me. “Hey, you ever think about having kids? Gabrielle and Gareth can’t get enough of you. You’d make a great dad.”

If he wasn’t a friend on top of being a client, I would never answer such a personal question. But I couldn’t avoid answering TK. “Gotta find the right mate first.”

He chuckled. “You mean a hot alpha like you, who owns his own business, doesn’t have any prospects?”

“Oh, I have plenty of offers. I just haven’t found the right one.” And never expected to. The chance to be with my one true mate had come and gone. And I didn’t want to settle for anyone else.

“High standards?” TK eyed me. “Or maybe still pining over someone.”

“Neither.” We were close friends, but I wasn’t ready to tell him about that part of my past. Didn’t want my life to become one of his songs. “I haven’t met anyone who makes me want to spend less time here.”

“You can’t stay married to your work forever.” TK nodded. “But I get it. I was like that until I met Kish.” He slapped my back. “I have a feeling you’ll find your mate someday. And I can’t wait to meet him.”

I shrugged. I’d given up on that fairy tale long ago. Sure, I’d had my share of bed buddies, but I wasn’t about to mark any of them as mine and would never bring a child into the world with anyone other than my mate. “I’ll see you Monday?”

Lifting a brow, TK shook his head. “Um, no. Kish will be here, but I have a rehearsal with my dancers. Hey, some of them are single.”

“No thanks.” I playfully shoved him into the changing room. “Go get your kids, and have fun at your rehearsal.”

Leaving the pop star, I headed for my office where I had my own personal bathroom and shower. I was done for the day, too. After washing up and saying goodbye to the remaining staff, I took the elevator down to the parking garage. Before I became personal trainer to TK and Kish, I’d never used the underground roadway. But then I awoke one night to a camera flash through my bedroom window. Thank goodness I hadn’t brought anyone home that night. When I’d told my celebrity friends the next day during their training session, they’d suggested I use the exclusive route to get out of central Saramto. It cut twenty minutes off my drive, and I hadn’t had any unwanted visitors since then.

Tonight, I took the route a little farther than normal to avoid the pouring rain. I wasn’t in the mood to enjoy the wet, blurred scenery. It would only dampen my mood even more. TK had gotten me thinking about my lack of a mate, about the person I’d thought would be in my life forever who’d disappeared without a trace. I hadn’t grown attached to anyone after him, too afraid they’d eventually leave me as well. A lonely life, but I kept myself busy so I hadn’t thought about it too much. Not until tonight.

When I reached my exit, I pressed the button on my remote then waited for the gate to open before driving the final two blocks to my bungalow. It wasn’t a large house. A two bedroom, the second of which I used for an office and workout room. And in a fairly quiet neighborhood where neighbors still waved in passing and kept an eye on each other’s homes. They all knew the night I had the rogue photographer, and one had even phoned the police.

Yet no one seemed to have noticed the bundle of clothes curled up on my porch. I parked in my driveway and wondered if I should even step out of my car. What did the person want? Were they there specifically for me or just looking for a dry place? I was a strong guy and could take most people down on my own, but I had no defense against a gun. Should I risk it?

I cautiously got out of the car and walked to the porch steps. “Um, can I help you?”

The person glanced up at me, and I gasped, locking onto the most beautiful pair of eyes I’d ever seen. Eyes belonging to a person I would never forget. “Roan?”

He didn’t stand as I drew closer, only continued to stare with big, sad eyes. And he still had his naturally pouty bottom lip. What had happened to him since I’d last seen him? And why did he suddenly show up on my porch? Was I dreaming? Had I fallen asleep at the wheel? I pinched the top of my hand then let go at the pain. Nope. Not a dream. 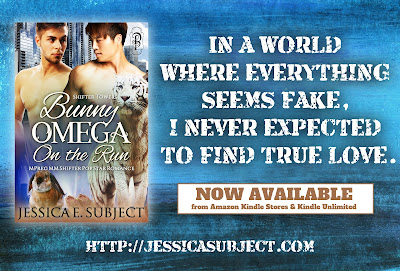