A BEAR SHIFTER DETERMINED TO MAKE HER HIS MATE 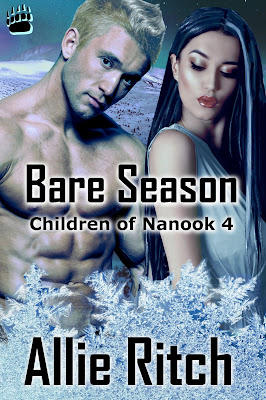 
Idonea has been afraid of frost bears ever since she was attacked by one. She has also been distrustful of men after the one who should have protected her ran away. As a shifter, Massak takes the form of both man and bear, so he should be her worst nightmare. One whiff of her scent, though, and he knows they’re meant to be together. Winter is the mating season on the planet of Jensen—a time when nature strips everything bare and primal instincts rise to the surface. Massak must use this time to prove to Idonea that he’s her perfect mate. He’ll use every skill he has to protect and pleasure her until the stubborn female admits she’s his.


Idonea wasn’t sure she’d ever look at her sled again without remembering what she and Massak had done on it. As for Kelda, her hound was already yipping in excitement. The canine got into position up front and fidgeted and barked as she was harnessed.

Thanks to Massak’s successful hunt, Idonea’s sled was full and heavily weighed down. She climbed onto the back and cast him an uncertain look.

“With so much packed on here, we can’t both ride on the sled,” she explained. “Will you travel in frost bear form?”

He was very intimidating as a bear, but she supposed she would get used to it.

“I’ll travel on two legs for now.” He pulled on his shirt and added a fur coat from his pack, though he left the hood down.

She wouldn’t go too fast, so he could keep up.

Idonea tugged on her gloves and pulled up the snow hooks. She signaled her hound to get moving before the silly animal barked herself hoarse. The instant they lurched forward, the canine quieted and focused all her attention on traveling forward. The sound of panting and the hushed scrape of the sled over the snow were the only noises.

Even Massak remained quiet. He trudged stoically at her side, his long legs seeming to eat up the distance. The falling snowflakes isolated them from the rest of the world, making her feel as if they were the only ones on the planet.

She hadn’t realized she kept looking at him until he turned and smiled.

“Where is your village?” he asked in that deep voice of his.

“I live in Sos. It’s the next village over from Idona. We’re still close enough to the shore to take advantage of the fishing and hunting, but we’re inland enough that we don’t have to worry about sudden breaks in the ice.” She shot him a sly glance. “Or about having to deal with a lot of nuisance bears.”

His grin turned toothy, but he faced forward again. “Sos?”

“A strange name, I know.” She fixed her gaze on Kelda’s tail. “When my pioneer ancestors first came to settle this world, they arrived in great flying ships. The ones who eventually founded my village crashed. ‘Sos’ was the message they sent to signal their distress as their ship went down. It broke through the ice and was ultimately destroyed, but most of the people aboard were able to escape. Since they came to Jensen to live more harmoniously with nature, the loss of technology wasn’t so important. Still, I imagine their first winter was a struggle. They named the village after their cry for help. Perhaps it was meant as a joke at first, but it stuck.”

“My ancestors faced similar hardships when they first arrived,” he said. “Illness threatened to annihilate them, since their bodies could not tolerate the bacteria here. That’s why Nanook, the father of my people, asked the great frost bear to join its spirit with his. It was a matter of survival.”

She studied his strong profile. “You know, many villagers think the Children of Nanook are only a myth—farfetched tales of magical men who shift into bears.”

That seemed to amuse him. “Do you think I’m magical?”

“Yes, but you’re also flesh and blood.” She was now intimately familiar with his flesh. “So tell me more about shifters. You said most aren’t as sociable as you are.”

“Most, but not all,” he answered. “We are a combination of man and beast, so we do have a sense of community. We form clans, and as I told you, we have friends. Sometimes we’ll find an especially good hunting spot and use it as an excuse to hold a gathering.”

“And you visit your sister and nephews,” she added, remembering what he’d said about his family.

“My nephews are young but grown, and sometimes their paths cross mine while roaming. Since my sister has mated, she doesn’t travel as far. She has a stretch of shore she prefers.”

Idonea could tell he was fond of his kin, even if shifters didn’t interact the same way as her people. “Is Tuaq a family member or friend? He’s why you were visiting Idona, right? Or no, you said you were following a scent.”

“Tuaq is a friend, though I hadn’t seen him for several years,” he answered. “I went to Idona to continue my investigation. I visited Shila and Miksa first, but I wanted a male perspective.”

She remembered him mentioning the female shifters.

He looked her in the eye. “Three shifters have settled with clawless mates in recent years, when before our races remained apart. Some of my people are concerned about what this could mean for the future. I was chosen by my clan to look into the matter.”

“You were?” Idonea’s blood suddenly turned to ice. “Is that why you’re spending the winter with me? As part of your investigation?”

“Of course not.” He narrowed his eyes and pressed his lips into a tight line.

He regarded her for a moment, as if debating how much to tell her. “Because you smell good,” he finally replied. “You smell right.”

It was a strange compliment, but she was oddly touched. She couldn’t doubt he was telling the truth—not when he was looking at her with such intensity. Then it hit her.

“Wait a second! The scent you were tracking from Idona was mine? You were following me?”

“Your scent ensnared me the second I inhaled it.” He drew a deep breath and released it with what sounded like a rumbling purr. “I would have followed it to the far side of the planet.” 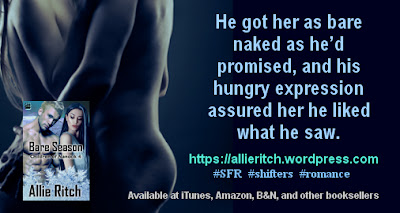