Read chapter one of DEMON ON JACKSON STREET before it releases! #Romance #PNR #MPreg #Books #Reading 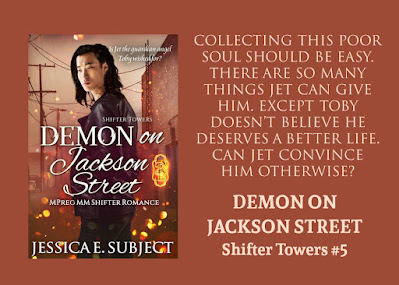 Hello! It's only a few days before the release of DEMON ON JACKSON STREET, the fifth book in my Shifter Towers series. I've been sharing snippets from the story as part of Weekend Writing Warriors, but today and tomorrow, I'm going to share the entire first chapter with you. TW // There is bullying described in this chapter, as well as in other parts of the book.

Chapter One
Toby
“Here’s your money.”
I took the bills from the shift manager as she closed the cash register. Forty dollars for a ten-hour shift. Not even minimum wage, but it was money I didn’t have to claim on my taxes. Money that would go toward paying for my grandmother’s weekly medication and allow me to pick up a few groceries as well. “Thank you. Would you like me to come in tomorrow?”
“Naw.” Becky waved her hand in the air. “We don’t need you again until Thursday. Eleven a.m. Don’t be late.”
I nodded, though I didn’t understand why she always said that to me. I’d never been late since she’d been promoted to manager after a month of working at the secondhand store or for the two years I’d worked there before she’d even started.
I grabbed my jacket from the staff room at the back then left the store. At the other end of the strip mall was the drugstore where I had Mimi’s prescription filled.
Mr. Gilli had the medication ready for me when I stepped up to the counter. “Good evening, Toby. How was your day?”
“Fine, thank you.” My response never varied. Because nothing in my life ever changed. I worked a dead-end job for next to nothing, and, when I wasn’t there, I was with my sick grandmother. Never anywhere else. And it’s not as if there would ever be any departure from the monotony that was my life.
“Well, say hi to your grandmother for me.”
“I will. Thank you.” After paying for the medication and tucking it into the inside pocket of my coat, I walked through the aisles to get a few groceries. I picked up a couple cans of chicken broth, a bag of egg noodles, a jug of milk, and some bananas. At the cash register, I gave the last of my money to the clerk then took the paper bag of food and headed home.
The sun had already set, so I walked on the side of George Street with the streetlights. Some of them had been burned out for months, but it was still better than the dark shadows on the other side.
As I made my way to my apartment building on the corner of George and Jackson Streets, I continuously looked behind me to see if I was being followed. As an omega, it was imperative I constantly know of my surroundings. But being one of only a handful of non-shifters in the whole metropolis of Saramto made me an even bigger target for alphas looking to cause trouble. I couldn’t shift to escape danger or fight back, so I had no choice but to stand there and take their harassment until they got bored with me.
I was nearly home, only a block away, when I heard a wolf whistle. Heart racing, I paused, trying to figure out my best course of action. I darted around the corner, only steps away from the front entrance when the noise came again. From right in front of me.
“Look who we have here.” Benji, a wolf shifter who was the self-proclaimed head alpha on the block, stepped into the glow from the streetlight up ahead. “A lonely omega with a bag full of groceries for us. How kind.”
As his three cronies stepped out of the shadows, I clutched the bag to my chest. It was all the food I had for my grandmother and I until I got paid again. I couldn’t afford to part with it.
“So, what are we eating tonight?” Chad yanked on my sleeve then wrestled the bag from my arms.
Dan pushed me away as I tried to grab it back. He peeked inside. “Not much by the looks of it.” After pulling out the jug of milk, he tossed it to Mark.
“C’mon, guys. This is all I have.”
There’d been too many days recently where they’d taken all my food, and I’d gone without, sacrificing what I could find for my grandmother. Until recently, Lester, a racoon shifter from the neighborhood, would tell them to leave me alone, but he’d disappeared last month. And Mrs. Apple was too ill and bedridden to chase them away with her broom.
“You’re wrong.” Mark twisted the jug open then began to drink my milk. He wiped his mouth after chugging half of it. “It’s all we have.”
Come back tomorrow to read the rest of the chapter!

DEMON ON JACKSON STREET
Shifter Towers book five
Jet
Once upon a time there was a demon who was the best at convincing people to sell their souls. That was me. Is me. And now I have a new assignment, one Father told me would be difficult. I didn’t know what “difficult” meant until I met the young man, someone who has barely anything. Collecting his soul should be easy, right? There are so many things I can give him. Except, he doesn’t believe he deserves a better life. I have to find something he desires before the assignment is given to my brother. Because Crow uses the most villainous means to obtain souls. Lines I don’t cross. And I don’t want to see Toby hurt. There has to be another way.
Toby
I’m not like them. I can’t shift into a predator to defend myself, or even into a small rodent to run and hide. The wolf shifters know that every time they rough me up and steal my food. I always wish for a guardian angel to protect me from them. Then one day Jet appears, looking nothing like the angel I’d imagined. But I don’t know if I should trust him. He makes me feel things no other alpha ever has. Dangerous things. Not good when I have to stay focused on my grandmother. I don’t know how much longer I’ll have her around.
RELEASES JANUARY 18!
AVAILABLE FOR PRE-ORDER:
AMAZON US | UNIVERSAL BUY LINK
NOW AVAILABLE IN PAPERBACK!