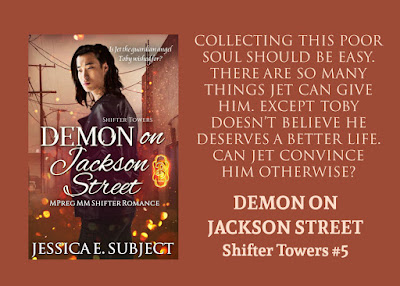 Earlier this week, the fifth book in my Shifter Towers series, DEMON ON JACKSON STREET, released. It is an MPreg MLM Paranormal Romance. And while this story is part of the Shifter Towers series, most of this story takes place on Jackson Street.
Jackson Street has been mentioned in previous titles from this series. In fact, many of the main and some secondary characters grew up there.
So, I thought I’d share snippets from each of the stories in the series about growing up on Jackson Street…
From Bunny Omega on the Run: This snippet is a conversation between Kish, one of the main characters, and Tati Nan, a fashion designer. Tati has brought over a suit for Kish to try on that he will wear to dinner with his boyfriend, TK, a global pop star. This will be the first time they will be seen out in public together.
She shoved past me into my apartment. “I want to see it on you. Want to make sure it fits.”
I glanced out the door and through the hallway window to the street. No cars in front of the building. “Um, where exactly did you park? This neighborhood isn’t exactly trustworthy.” Maybe her car had already been stolen.
“My partner dropped me off.” She laid the clothing bag over the back of my sole kitchen chair. “And I know exactly what this neighborhood is like. I grew up a couple streets over. Not exactly Jackson Street, but pretty close to it.”
I closed and locked the door, nodding in agreement.
From Mink Omega in Hiding: Roan is hiding in the bathroom at a restaurant, as he is afraid to meet Hansol’s famous friends. Little did he know, one of them was in the bathroom with him.
Suddenly desperate to make a good impression, I took the guy’s advice. He even showed me the best way to hold my shirt so it dried quickly. And when I was dressed again, he held out his hand. “I’m Kish by the way.”
I felt the blood drain from my face as I shook his hand. “You’re him? Model? TK’s mate?”
“That’s me.” He smiled, and it was right then I knew what TK and whoever had hired him to model had seen in him. I never would have guessed he was from Jackson Street. “You’ve already met one of us, and it wasn’t so bad.”
“I...I guess.” How had I been talking to someone so famous and not noticed?
Kish laughed and patted me on the back. “You’re too cute. TK is going to love you.”
From Pika Omega Plus One: Yoni is a field reporter for Saramto Shifter News Network, and has finished work for the day.
Anxious to leave the station, I loaded my laptop and phone into my messenger bag and headed to the equipment room to sign out what I would need for the interviews tomorrow. I was still too new to get a station vehicle to use, but my daily travel costs were paid for, and the hospital was easily accessible by public transportation between both my apartment and the station. Plus, it wasn’t as if I had to travel anywhere near Jackson Street—the one neighborhood Dannie had warned me to avoid, no matter how big the story seemed. So, I usually left my car at home, unless I drove back to Bolton.
From His Omega on Stage: Going to share two snippets from this story.
1) Jun is on his way to work. It’s a day that will change his life. He just doesn’t know it yet.
After a shower to wake my ass up, I got dressed then snatched a protein bar on my way out the door. I caught the first bus of the morning, and, instead of taking it to the LRT station, I got off a few blocks from Main Street and walked the rest of the way to Shifter Towers. I needed some exercise before being stuck inside all day. Most people in Saramto wouldn’t walk the streets this early in the morning, while it was still dark, but I lived a block from the worst part of Jackson Street. Downtown was nothing compared to my neighborhood.
2) Jun is at Adan Records to interview for a new job, but TK wanted to introduce him to Dannie, first. In this snippet, some of the other characters who grew up on Jackson Street are mentioned. (TK speaks first.)
“Are you staying at Ash’s again, or do I need to send my driver to get you before he arrives at my place?”
I rubbed the back of my neck. “I’m not sure. We haven’t really talked about that yet.”
“Cute.” Dannie chuckled. “Everyone I’ve met who grew up on and around Jackson Street is the same. Street smart, but shit when it comes to discussing the next step in their relationship.”
TK swatted his friend. “Hey, Ash and Jun’s relationship is still new, but I was once like that, too. And if you want to move in with Tati, why don’t you bring up the idea instead of waiting for her?”
“Tati Nan?” I covered my mouth, not having meant to blurt out the name of the famous designer. There was no way she could have grown up around me. They were likely talking about someone else anyway.
From Demon on Jackson Street: Toby is on his way home from work.
As I made my way to my apartment building on the corner of George and Jackson Streets, I continuously looked behind me to see if I was being followed. As an omega, it was imperative I constantly know of my surroundings. But being one of only a handful of non-shifters in the whole metropolis of Saramto made me an even bigger target for alphas looking to cause trouble.
Jackson Street may not be the best neighborhood, but none of these characters every forget where they’re from.

The second book in the series,
MINK OMEGA IN HIDING
is available in digital and print:
Amazon US | Universal Buy Link

The third book in the series,
PIKA OMEGA PLUS ONE
is available in digital and print:
Amazon US | Universal Buy Link

The fourth book in the series,
HIS OMEGA ON STAGE
is available in digital and print:
Amazon US | Universal Buy Link

The fifth book in the series,
DEMON ON JACKSON STREET
is available in digital and print:
Amazon US | Universal Buy Link
Posted by Jessica E. Subject at 3:00 AM