He was looking for an escape. In her, he found his home. A RELUCTANT ATTRACTION by @LeoRosanna #Romance #NewRelease #Handymen 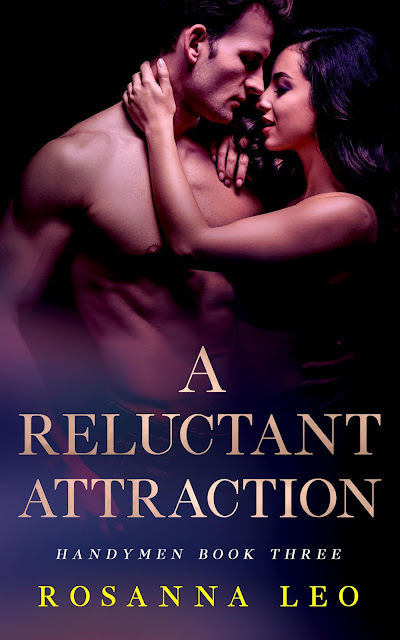 He was looking for an escape. In her, he found his home.

Contractor and Handymen host Nick Zorn needs a change. He’s been feeling listless, and when his ex-girlfriend embarrasses him in a viral post by sharing private details of their sex life, he’s downright ready to escape. When an opportunity to reinvent his career arises, Nick takes it, even though it might mean the end of Handymen. However, the team has one more project to tackle together first—a struggling cat sanctuary in dire need of renovation.

When Nick arrives at the shelter and meets its owner, a lovely widow named Claire, his life is once more thrown into disarray. Neither of them is looking for a relationship, but the attraction is fierce. As he helps Claire fix her workplace, he realizes he wants to help her in other ways too. Their flirtation sizzles, flaring into a friends-with-benefits arrangement.

But the more time they spend together, the more reluctant these ‘friends’ become to fight their deepening connection, even though they know their inevitable break will devastate them…

Damn, he’d never been so at a loss for words around a woman.

She was just so lovely. No, not just lovely. She looked fucking hot, to be perfectly honest. She’d worn her hair down, and the chocolate waves danced around her shoulders. Her jeans were like a second skin, emphasizing every curve. She wasn’t wearing one of her usual slogan T-shirts. Instead, she’d put on a silky black blouse, one that hugged her breasts. Although she’d been wearing ballet slippers earlier, she’d slipped them off when everyone went home. She now went barefoot in the house, but her toenails were painted a vibrant pink.

They were the sexiest feet he’d ever seen.

Claire didn’t wear a lot of jewelry, from what he’d seen so far, and tonight was no difference. Her only ornamentation was a silver bracelet that dangled around her slim wrist, and some sparkly earrings.

And her wedding rings, of course.

“I hope you enjoyed the party,” she said, her voice soft and sexy. He could just imagine what it would be like to have a voice like that whispering in his ear first thing in the morning, as they snuggled in bed.

Anytime he pictured himself snuggling with Claire, and he’d begun to imagine it a lot, they were always naked.

“I did, thanks.” His throat was parched, and no matter how often he cleared it, it didn’t help. “Do you mind if I get myself some water?”

As Claire turned to hand it to him, she must not have realized he had already stepped closer. Their arms connected at an odd angle and the water splashed out of the glass, all over the front of his shirt.

It clung to his gut, as if he was a contender in a wet T-shirt contest.

Nick plucked at his shirt. “It’s okay, really. I was kind of hot anyway.”

Claire looked at the wet patch and let out a strange laugh.

She was totally checking him out.

Grateful for that ab routine his trainer had given him, Nick reached for a couple of paper towels and dried himself off as best as possible.

“I could get you another shirt, if you’re uncomfortable.”

“Of course. I’m sure you’d rather not dress up in my dead husband’s clothes.” She pulled a face. “I’m sorry. That was meant to be internal monologue. Ugh. I’m not very good at this.”

“I’m not sure I know. I might need you to spell it out.” He drew closer, so close her perfume teased him with its sweetness.

She swallowed. “Chatting up wet men.”

Another step closer. “I only see one man here.”

“You, then,” Claire said on a breath. “I’ve been trying to chat you up all night, and failing miserably.”

“Ah. I should probably let you know you haven’t been failing at all. You have all my attention.”

Her sparkly lips formed an ‘O,’ although no sound emerged.

“If all it took was a glass of water, Claire, I would have drenched myself some time ago.” 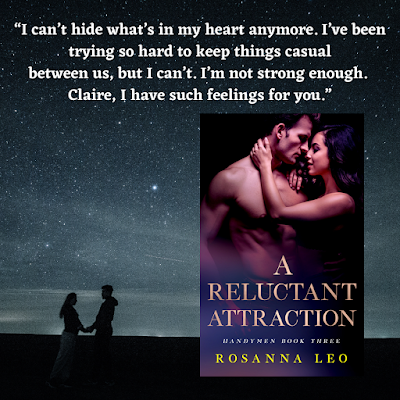 Rosanna Leo writes contemporary and paranormal romance. She is the First Place Winner of the 2018 Northern Hearts Contest (Contemporary Romance) for A Good Man, Handymen 1.

From Toronto, Canada, Rosanna occupies a house in the suburbs with her husband and their two sons, and spends most of her time being tolerated by their cat Sweetie. When not writing, Rosanna works for her local library, where she is busy laying the groundwork to become a library ghost one day.