He's the inspiration for the latest romance novel. Can he find the author? SHAMELESS IN SEATTLE by @AlexisSDuran #NewRelease #Romance #MLM #Books #Reading 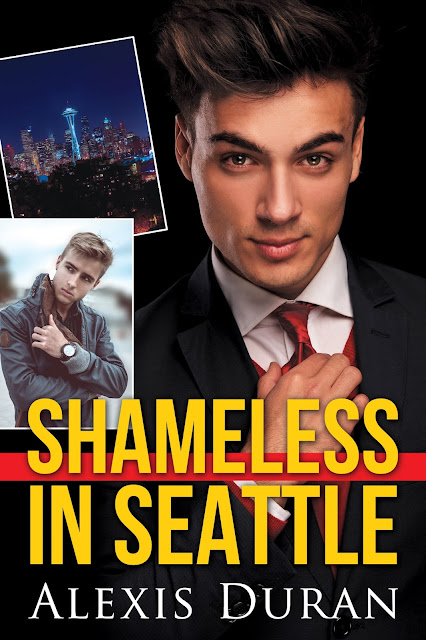 SHAMELESS IN SEATTLE
by Alexis Duran
Aaron Schafer, star reporter for the Seattle Times, is shocked to find out he's the inspiration for a series of bodice-ripper romances written by a reclusive author no one has met.  He's even more surprised, and disturbed, on discovering intimate secrets from his past buried in the pages of Shameless in Seattle. Who is this mystery author, who has clearly been stalking him and stealing details from his life? Are they dangerous? And worse, will they reveal Aaron's darkest secret to the world? Aaron decides to stalk the stalker, a decision that just might change both of their lives.
AVAILABLE FROM:
AMAZON

Shameless In Seattle - Chapter One
The twist of Melanie's lips confirmed Aaron's darkest fears. Add the sparkle in her eyes and the way she lightly fingered the pink straw in her drink and he knew he was doomed. Instinct told him to leave her sitting there, go home, eat a tub of ice cream and forget all about the message she'd left on his phone.
Instead, because curiosity hadn't killed him yet but it did pay the bills, he threw his satchel on one of the empty seats at her curbside table and sat down.
"So what's the big joke?" he asked.
She batted her thick lashes at him. "Did I say there was a joke?"
"Well, all the laughing you were doing when you asked me to meet you indicated some sort of humorous development at my expense."
"It's not a bad thing. It's flattering. Any man with sense would be flattered."
"Oh, no. No more blind dates with hapless clients, Mel. I don't care how hot or hung he is."
"Nothing like that, I swear. So how are you, Aaron? Order a drink or two, then we'll talk."
He shook his head, leaned back and tried to relax. He'd half expected her to have another potential mate sitting beside her when he arrived, so he took a moment to be thankful she was alone. Ever since his misguided fling with Melanie Parker, she'd adopted him as her pet project. Instead of taking his decision to stick strictly with men personal, she'd rallied to the cause and seemed determined to hook him up with desperate ex-cons. Her job as a defense lawyer gave her an endless supply.
He nodded at the waiter, Vic, who nodded back and bee-lined for the bar. "I'm fine," he said.
"Fucked-up, Insecure, Neurotic and Egotistical? How nice. Glad nothing's changed."
"Why am I here?" he asked.
"Because you love me. I know you're still pining, poor dear." She patted his forearm and slurped her drink. Truth was, Mel was like the nosy older sister he already had and didn't need any more of. Still, she was compelling, like a runaway train headed straight for him. He couldn't quite make himself jump off the track.
Vic the waiter set down Aaron's usual Chocolate Stout in front of him and another froo-froo mixed drink in front of Mel. He smiled at Aaron, fussed with the napkins and coasters and slipped away.
"Victor's cute. How about him?"
"Stop it."
"How long has it been?"
"Not long enough."
"You're crabby when you're not getting laid."
"How are things with Mel? Still supporting that homeless alcoholic while he's being sued by his ex-wives?"
"Andy isn't homeless. He's between permanent residences."
Aaron sipped his beer and felt better. Tension eased off him. He'd worked late again, getting a story in just under deadline. A diverting drink with Mel kept him from brooding at home, and Pioneer Square was hopping on a warm end-of-summer evening. He suspected it might be Friday night. He checked his phone rather than ask Mel and open himself up to ridicule about the dire state of his social life. Yup. Friday the 13th. Oh, swell.
"I don't suppose you read many romances, do you?" she asked nonchalantly.
"Oh, sure. I've got stacks of them hidden in the closet. Why?"
"Well." She looked around furtively before reaching into her enormous handbag and removing a paperback with a garishly bright cover. Further inspection revealed a glossy, embossed image of a male model posing as a tough guy of some sort, shirt open to his belly button, wielding a huge gun. A buxom blonde clung to his back but managed to contort in a way designed to expose maximum amounts of her impressive cleavage. In the background, the skyline of Seattle burned.
"What the hell?"
"It's the latest in the Shameless in Seattle series. I'm totally addicted. Hot, hot, hot."
"It looks ridiculous."
"Don't let the cover throw you, it's retro on purpose, kind of tongue in cheek. The story is luscious. And funny. And the action happens in places we know; places we know real well, like this place." She waved the book over her head.
"Pioneer Square?"
"No, silly. This bar. The Waterworks. And Martini Heaven. All the usual spots, and even unusual ones like Squid Row on Capital Hill and the offices at the courthouse."
"Really? Do you know the author?"
"No. She's apparently a bit of a recluse. And the name is a pseudonym, obviously."
Aaron noted the name on the cover for the first time. Olympia Konstantin. He lifted his gaze to stare into Mel's too happy green eyes.
"Are you Olympia? Are you writing this trash?"
"What? Me?" She hooted so loud other tables of drinkers looked over. "No! But you must know the writer."
"Why?"
"Because this guy—" She waved her hand across the muscled torso on the cover like Vanna White displaying the wonders of a brand new mini-van. "Is you."

Alexis Duran was born and raised in the Pacific Northwest. At the University of Oregon, her fascination with people and relationships led her to major in Sociology, but her main love has always been creative writing.  She's worked in museums, finance, film production, and for several performing arts organizations. Her favorite job so far has been inventorying the collection of a haunted Victorian Mansion.  She is the author of the Jacqui the Cat Mysteries, Masters and Mages and Edge of Night m/m fantasy series as well as several stand-alone romances.  Her fiction has won awards including the Rupert Hughes Award from the Maui Writers Conference. She has achieved official Crazy Cat Lady status with six cats.  She is currently working on the next Jacqui the Cat mystery and always has several new ideas brewing.
Connect with Alexis at:
Website / Blog
Twitter | Facebook | Goodreads | Amazon
Queer Romance Ink
Newsletter Signup