It's been a few weeks since I last participated, as I didn't have anything new ready to share. I'm working on the next TWO Shifter Towers books, but I still don't feel confident to share an excerpt from either of them yet. So, I'm going to share from some of my stories that have winter or holiday scenes. This weekend's snippet is from my first published story, CELESTIAL SEDUCTION, an alien romance.

Set-up: Frey has come to Earth and decided he wanted to stay here rather than return to his home planet. And he has a date, which he's anxious to get to. Unfortunately, it took a lot to convince his commander to let me stay. And now, he might be late for the date.

The ship lurched as it dropped in elevation. Within minutes it landed and the ramp door opened.

“Get out!” His former Mission Commander all but shoved him out of the ship. “You don’t deserve Tandee. I will inform the Chancellor you are dead.”

Although the old Ginnunian meant his words to hurt, Frey smiled as he stepped off the ramp. Staring across the recently harvested cornfield, he spotted his car parked on the side of the road. He rushed across the frosted dirt and corn stalks toward it, with the light reflected from the moon illuminating his path. He’d finally ensured no one from Ginnun would return for him. 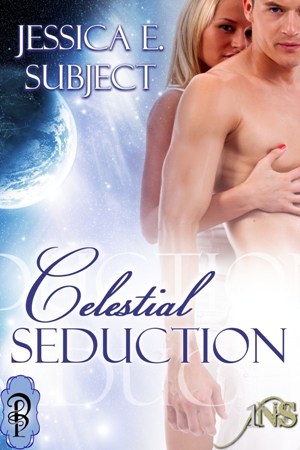