Is she trying to read his thoughts? Read a snippet from TAYRYM #WeWriWa #GalacticDefenders #scifiromance #MMromance

Thank you to everyone who came to visit me last weekend! This weekend, I'm sharing another snippet from TAYRYM, the fourth story in my Galactic Defenders series. Unlike the others before, TAYRYM is an MM romance.

Set-up: In last week's snippet, Gwenodyn learns what Tayrym is late for, but she still has so many questions for her best friend. We're getting closer to finding out Tayrym's secrets.... Enjoy!

“Oh, to get ready for your Defender training?” Her lower lip stuck out a bit as she moved to the side.

“Sure.” He didn’t want to tell her the true reason or listen to her whine about how much she’d miss him when he left. Not this morning.

She jumped in front of him. “You lie.”

Closing his eyes, he took a deep breath. “Stay out of my head, Gwen. Isn’t it unethical for Mingots to read minds without permission?” 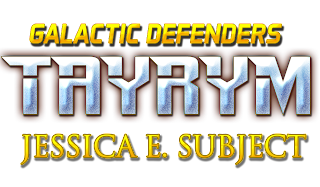