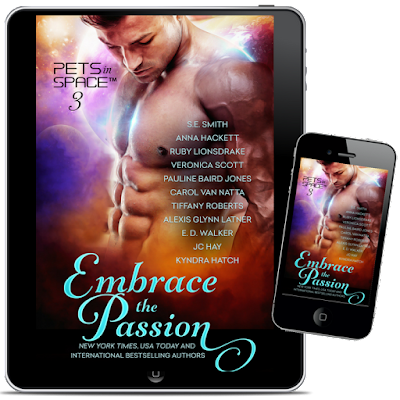 Top Ten things to know about

SHADOWS OF THE PAST

10.) Commander Rafe Penzak is one of the side characters from my TriSystems: Rangers series, and a man very much in need of his happily ever after.

9.) Dr. Nafisi Sultana has been single-handedly taking care of the JTF Rangers’ breeding pack of Umbra Wolves – the animal partners with which the Rangers are empathically bonded.

8.) The wolfbond – the connection between a Ranger and an Umbra Wolf – is permanent, and if either bondmate dies, it can leave permanent scars on the psyche of the survivor.

7.) Hephaestus Secundus, where Nafisi’s farm is hidden, is a tiny, tidally locked moon that lives in the shadows (and gravity wells) of both another moon (Heph Prime) and a gas giant (Accipiter) in the Three Systems.

6.) Umbra Wolves are mostly invisible in natural (or indeed, unpolarized) light. This is a side effect of their fur, which acts as a meta-lens and turns them into wolf-shaped blurs. In the right wavelengths of polarized light, their fur appears black, making them visible.

5.) The JTF Rangers have been fighting a long series of skirmishes against a criminal organization known as Triptych, who are an alliance of pirates, thieves, and traffickers with their eyes on destabilizing the Three Systems.

4.) Nafisi still blames the Rangers for her husband’s death – their insistence on keeping the wolf ranch hidden meant she was too remote for her husband to get medical care that could have saved him.

3.) The death of Rafe’s wolf has left him unable to understand his own emotions, a permanent trauma that has left him detached from the world around him.

2.) Two wounded people, a pack of invisible wolves, a gang of murderous pirates, and a planet of perpetual darkness may just be the recipe for a happily ever after.

1.) And the number one thing to remember about Shadows of the Past (and Pets in Space 3) is that a portion of our proceeds goes to support Hero-Dogs.org, an organization that trains service dogs and places them with veterans and first responders. 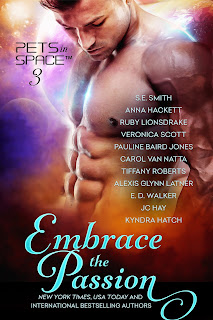 SHADOW OF THE PAST
By JC Hay

Commander Rafe Penzak is tired of jockeying a desk. With only months left before his forced retirement from the rangers, he decides to bend a few rules for one last mission: follow up on intelligence that vicious criminals have found the ranch that supplies the rangers’ umbra wolves. He’s ready to confront the reminder of his wolf’s death, but nothing in the Three Systems could prepare him for the spitfire who runs the farm.

Veterinarian Nafisi Sultana has run her wolf breeding program her way since the death of her husband. The last thing she wants is another ranger taking up space, correcting her methods, or being underfoot. But she can’t miss the pain and sorrow that haunts the greying commander, and her need to heal others pulls her into his orbit despite the agonizing memories he wakes in her.

With storms, raiders, and a renegade wolf pup driving them together, Nafisi and Rafe have to set aside their damaged past, or they’ll never be able to save something they both want more—a future.

EMBRACE THE PASSION: PETS IN SPACE™ 3

SFR Galaxy Award Winner JC Hay writes romantic science fiction and cyberpunk where the relationships matter as much as the tech. After all, the coolest gadgets in the world are useless without someone to share them.

In addition to Romance Writers of America, he is also a proud member of the SFR Brigade (for Science Fiction Romance), the Fantasy, Futuristic, and Paranormal Romance chapter, and RWA’s Published Author Network.