Finding love on a planet millions of miles away from Earth. FIRE BEYOND THE FROST by @TheaLanden #romance #lesfic #scifirom 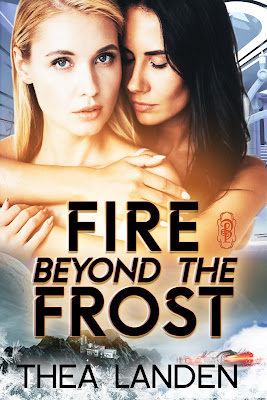 FIRE BEYOND THE FROST
by Thea Landen


Following a failed relationship with her supervisor at work, Dr. Catalina Frost volunteers her services with a charitable organization providing medical aid to those in need. In her first journey away from her home planet of Earth, she travels to the opposite end of the galaxy to the icy world of Ruvuk. Dismal weather conditions and an unfamiliar species of aliens take her far outside her comfort zone, but she’s determined to fulfill her obligations.

When Sari, a human settler on Ruvuk, first heard about a doctor being assigned to lend assistance to her health clinic in a remote village, she never expected the gorgeous woman who walked through her door. She introduces her to the planet’s ways of life and is impressed by her skills and experience. Though she drops hints about her growing attraction to Catalina, she’s shocked when those feelings are reciprocated.

The pair embarks on a romantic fling, but the definitive end date of Catalina’s assignment approaches quickly. She wants to plan for the future, but Sari has been hurt by false promises before and asks that they simply enjoy the time they have left. Will they each return to their separate lives or can they find a way to reunite somewhere in the galaxy?

The music stopped. Hundreds of heads tilted back, excited faces turned skyward in a synchronous movement threaded with palpable anticipation. Four incandescent orbs loomed overhead, shining in radiant shades of orange and gold. The spaces between them measured a similar distance, yet Catalina couldn’t understand why the lopsided figure was cause for such a tribute.

A near-imperceptible shift in the spheres’ positions removed all traces of her skepticism. Murmurs fluttered through radiating circles around her as the moons locked into place, creating a flawless square with the plateau at its center. In that instant, she was struck by the magnitude of the perfect alignment and its effect on her. While her journey to Ruvuk had been arranged due to her professional expertise, it turned out to serve many other purposes. The magnificent sight erased her doubts regarding her reasons for leaving Earth. Her decision had proved to be the right one.

Someone’s hand rested on the small of her back. Catalina looked away from the moons, her head swiveling to the side. All sets of eyes were focused on the sky, save one. Sari stood at her  shoulder, her face bathed in the lunar glow. Beneath the edge of her knit hat, her round eyes gleamed with their usual liveliness. There was a slight change, however, something darker in their depths.

Her sly remarks and pointed comments had always been couched in a tone of flirtatious teasing. Tonight, there was no denying the hunger revealed in her sensual expression. Berry-red lips parted, silently asking the remaining question. The harmonious combination of the symbolic moment and her alluring charm made the plea impossible to refuse.

Catalina turned her body to allow Sari’s arm to circle her waist as she leaned forward. She hesitated, letting the proximate warmth of the other woman’s mouth dispel the cold air between them. Another hand settled on her hip. Its blazing intentions were clear, even through the thick padding of heavy outerwear.

Their lips met in a soft kiss. All the restless nights spent wondering about Sari’s true feelings toward her felt insignificant. Now that she experienced the searing imprint of her companion’s touch, she didn’t want to leave it.

She allowed Sari passage to her mouth, their tongues mingling in a delicate spiral. Without breaking their contact, Catalina rested her gloved hands on Sari’s shoulders. The grip on her waist tightened, drawing their bodies closer. Her fingers entwined behind Sari’s back as their lips melded together, soothing and stimulating the ache in her core. The sweet taste of the kiss ignited hidden desires. She wanted more. 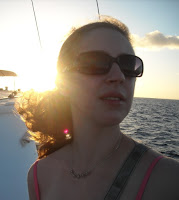 Thea Landen lives in New York with her husband and two children. A former educator, she strives to encourage creativity and passion in all those around her, and uses writing to help inspire. Though she reads and writes in nearly all genres, she has a special fondness for science fiction, fantasy, and adventure and anything that pushes the imagination beyond its usual limits. When she’s not writing, or thinking about writing, her hands and mind are occupied by either yarn crafts or role-playing games.