The stakes have never been higher! Check out RISE BY MOONLIGHT, the explosive conclusion to @NancyGideon's BY MOONLIGHT series #romance #PNR #newrelease 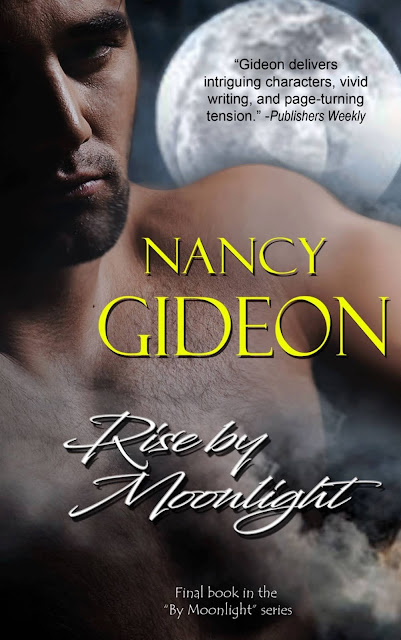 Max and Charlotte return for the explosive conclusion of the “By Moonlight” series . . .

and the stakes have never been higher!

He’s the Promised One

A fiercely determined NOPD detective, Charlotte Caissie has sworn to defend her beloved city and her unborn child from both criminals and otherworldly factions at war. While standing boldly at the side of her mate/husband, secrets from the past return to shake the foundation of her beliefs.

They have a Problem

Walking a marital tight rope between opposite worlds, Max and Cee Cee’s paths place truth and trust at odds when outside threats force enemies to become allies. The time to take a stand for their family and their future is at hand. Time to rise together for the survival of all they love!

“Every delicious word on the page exhilarates with a sensuous ferocity. Hopelessly addicted.” 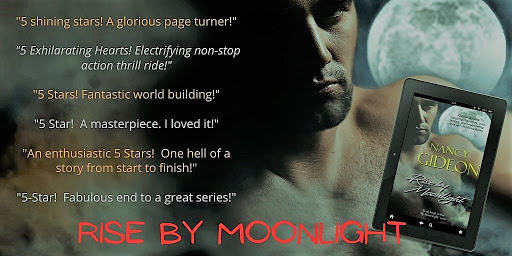 Genevieve Savorie couldn’t be underestimated. She had resources and money and motivation. And she had what they did not. Time. Time to plot and plan and discover their vulnerabilities. Charlotte was his strength, but also his weakness, his Queen to be protected at all costs if the match of skill and strategy was to be won. In allowing her to return to the streets, he was exposing his flank as well as his heart.
But they didn’t know his mate. And that would be their downfall.
That, and being foolish enough to touch what was his.
“Tomorrow,” he began, voice soft and threaded dangerously with steel, “we go back to work and find out who betrayed our trust. I put Silas on our mysterious Mr. Maitlin from Chicago. Perhaps we’ll get lucky and intercept him and the information he stole.” Genetic information on his wife and unborn child. “And perhaps discover who his accomplice is here in New Orleans.”
Cee Cee’s jaw turned concrete. “Brady. We both know it.”
“Yes, we do.” Quietly, determinedly said.
“Someone put our child in danger, Max. We’ll find out who. And we’ll make them very, very sorry.” 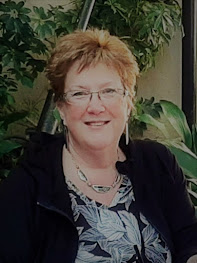 Nancy Gideon is the award-winning bestseller of over 70 romances ranging from historical, Regency, and series contemporary suspense to dark paranormal and horror, with a couple of produced screenplays and non-fiction writing books tossed into the mix. Newly retired from 20 years as a legal assistant, she feeds a Netflix addiction along with all things fur, fin, and fowl, and dotes on her grandguy. She’s also written under the pseudonyms Dana Ransom, Rosalyn West, and Lauren Giddings.