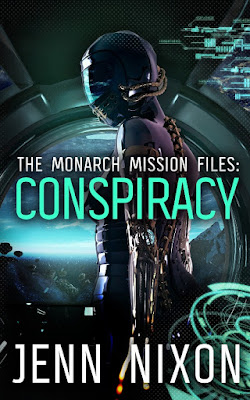 
Mari Yosoto has been keeping a dark and dangerous secret from everyone for the past three years. No one would believe her anyway, her ex-fiancé had seen to that. Instead of wallowing in misery, she stays busy, shuttling cargo to the Moon and back, enjoying the easy work and time alone. An old EarthCorps acquaintance asks for her help, and Mari can’t say no, even if it means working with the ex’s former best friend.

Although Trevor Nash took the missing person’s job to help his former commanding officer, deep down he needed to see Mari again. After trying and failing to find out what happened to her, Trevor makes the best of an odd situation, hoping he can remind Mari of their budding friendship and finally get some answers. When the mission goes sideways and they find the not-so-missing girl, a centuries-old conspiracy theory comes to light and the only thing more unfathomable is learning Mari’s secret.

Together with their newly formed ragtag team, Mari and Trevor team up and undertake a mission unlike anything either of them has faced before with life-altering and possibly deadly consequences.

Nash was already saying ‘we’, a team building exercise everyone had taken in EarthCorps training. He lifted off the hover car's bumper, moving to the driver’s side and jutting his chin toward the passenger’s door. He was always a good, fair guy, much more so than his best frecking friend. “Happy to give you a lift home, get clothes and whatnot?”

“Nope, everything new. I have ten thousand K plus to spend. Take me to Walzon, they have what I need.” Mari shrugged, slipping into the other side of the very rounded off hover car, hating the trippy translucent paint. The aluminum they used made the vehicles less sturdy. She liked hard steel, which is why she enjoyed flying. Even the Personal Flying Vehicles were still made of metal, it was hard to trust anything less.

Mari gasped when the belt secured her against the seat, strapping down both her arms.

She shut her eyes.

The seatbelt moved into place, freeing her right arm, which reached out and clamped onto the door handle.

“Mari?” Nash’s voice was soft, concerned. She knew why. She had three years to replay those moments in her head, listening to the voices in the surgical suite when she woke. He was there too, in the background with the ex, she remembered what they both had said.

After a deep breath, her grip went lax and she tucked her left arm over the belt before glancing over. “Ready when you are.”

Nash’s head tilted. “Mari. We’re gonna be in tight quarters for a week, regardless how fast this ship is. Can you do this?”

“It’s not claustrophobia.” Deep inside, Mari didn’t actually know if she still had the guts to do something like this again and when his gaze softened, she remembered something else Nash had said after she woke in the surgery suite. I hope she leaves your ass. It was the last thing she heard him say to the ex before she passed out from the pain. Her chuckle came out more tersely than she meant, so she shrugged. “We should probably find a Do-All-Stop and get a drink after we shop…if we’re working together, you need to know what you getting into. Well, most of it.”